The Fall (and Rise) of the Mutants 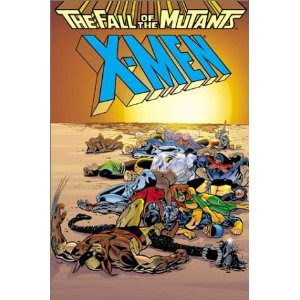 I've been rereading some of my old X-Men comics written by Chris Claremont. Nostalgia heavily tints my reaction to his writing, I can easily overlook some of the clunkier dialogue and the way plot strands are started in X-Men but resolved in completely different comics or sometimes even forgotten altogether. But being as objective as possible I would say that for me a lot of his best work on the mutant superheroes is in the issues I've just reread: Uncanny X-Men #212-227. He still has the verbose dialogue and captions for which he's famous but here they're stripped down to their dramatic and poetic essence. The two-page description of a crashing jumbo jet that opens #215 is astounding, as is the tense, hallucinatory chase sequence that follows. And Claremont has a knack for nailing the heart and atmosphere of a new locale in a few well-chosen sentences, be it a New York nightclub, a Scottish pub or a New Mexico desert.

"Darlin', how can anyone be an X-Man and not be a romantic?" Wolverine
Emotion is what drives Claremont's writing, an unabashed romanticism. He makes us care about the characters, putting us inside their heads, letting us know them as well as we know ourselves before destroying their lives and breaking our hearts.

Some wounds are physical. Others spiritual. No less cruel. No less mortal.
Tragedy overwhelms the X-Men during this set of stories: Colossus spends most of the run paralysed, Nightcrawler lies in a coma and Kitty Pryde is being slowly killed by her own misfiring superpowers. Even those who escape physically unscathed have other problems to deal with: Wolverine has a breakdown, his rational side collapsing, leaving his animal instincts in ascendance. Dazzler frets that her former life as a pop star has left her pampered and weak, traits that could get herself and her teammates killed. Plus, there's the small matter of humanity hating mutants and wanting them dead.

"Every path, every option seems to end in blood." Storm
Storm has a particularly bad time of it. Stripped of her powers in an earlier storyline she continues to lead the X-Men against foes who could kill her with a flick of a finger. Grief-stricken over the injuries sustained by those under her command. Conflicted over her oath never to take a human life versus the increasing need for lethal force in order for the X-Men to survive. Shocked by the revelation that the only way to save the world from a mystical apocalypse is to kill the man she loves. Forget Halle Berry's anaemic portrayal in the X-Men films, here is Storm as she should be: a woman of great honour, dignity and passion.

"You ever wonder sometimes whether we even deserve to be saved?" Crimson Commando
Moral ambiguity lurks behind the drama and the pulse-pounding action scenes. A trio of superpowered vigilantes hunt criminals for kicks while rationalising it with talk of honour and Storm fears the only way she can stop them is to resorting to murder herself. Former criminals become government sponsored superheroes while the altruistic X-Men are branded outlaws. The X-Man Rogue is herself a former supervillain seeking redemption for past crimes including the attempted murder of her teammate Dazzler. Meanwhile many of the humans the X-Men save want them dead, baying for blood no matter what sacrifices the mutants make to save them.

"If we gotta go either way might as well make it mean something." Wolverine
But there is hope too, an idealism that may be battered and tarnished but never vanquished. The X-Men keep fighting, striving for equality and acceptance no matter what. Moral victiores are achieved -- Collosus and Kitty Pryde prevent a rampaging mob from killing an injured Nightcrawler not by blasting them with superpowers but by making them confront the immorality of their actions. On occasion humans even stand up for the X-Men, judging them by their actions not by the fact that they're mutants. Speeches abound, a Claremont speciality, imploring everyone to live in harmony.

"I beg your pardon. But don't you know it's impolite to shoot people?" Longshot
But it's not all moralising and speechifying. There's fun to be had as SF and fantasy blend together with the odd bit of horror thrown in for good measure. Humour and quirkiness sneaks in too with Dirty Harry and the Brigadier from Doctor Who making sly cameos. And when Dazzler tackles the unstoppable powerhouse Juggernaut he turns out to be a fan of her records and is more interested in getting her autograph than engaging in an epic super-battle.

No wonder I love Claremont's X-Men.
Posted by Stuart Young at 8:47 pm No comments: