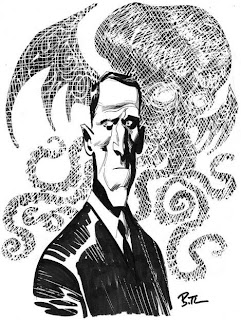 Interesting piece on HP Lovecraft over at Matt Cardin's Teeming Brain focusing on HP's fantastical imagination rather than his reputation as a master of horror. Now I'm not overly familiar with Lovecraft's work and do tend to think of him as a cosmic horror tentacle-monsters purveying misery guts. So I was quite surprised when I read one of his Dunsany-inspired pieces earlier this year -- I forget the title offhand, the story involved something about going up a mountain -- as it showed his range was wider than I'd realised.

Something else I noticed in the last couple of Lovecraft stories I read -- Dreams in the Witch House and The Dunwich Horror -- was the way the climaxes veered into action-adventure territory. But in a very perfunctory way as though Lovecraft either didn't have the talent or the inclination to dwell on that side of things in any detail. So the hero might wrestle with a knife-wielding assailant or rush up a hill armed with an ancient spell to tackle a demonic entity or do something else that wouldn't look out of place in an episode of Buffy but that stuff will just get mentioned in passing. I think there's a similar thing in The Call of Cthulhu -- "Cthulhu's free! He'll lay waste to all before him, the word is doomed, we're all going to -- oh, he's gone."

Maybe it's just because I've been reading some Robert E Howard lately but it seems to me that in the cited stories at least, Lovecraft is more action-oriented, in a teasing kind of way, than he's given credit for. In fact, as I was saying to a Howard fan the other day, it seemed to me that Lovecraft was actually doing the kind of action scenes that Howard is famous for but Lovecraft, deliberately or otherwise, just didn't do it so well.

Just a thought. Probably completely wrong-headed and ill-informed but those are the thoughts that I tend to have the most often.
Posted by Stuart Young at 10:15 am

Very interesting thoughts, Stu. I'm thinking more and more that HPL's veritably mythic stature in the popular imagination has somewhat simplified the prevailing memory of who he was and what he wrote. So I'm glad you're here to salvage the memory of the fact that he was a Buffyite before Buffyites were cool. ;)

It's a little-known fact that Lovecraft was working on a story featuring a blonde cheerleader heroine just before he died.