That About Covers It

When Peter Mark May asked me to edit Demons & Devilry for Hersham Horror the one thing I was confident about getting right was the cover. I have a soft spot for the old painted covers that used to grace pulp paperbacks and felt that a sleazy mix of sex and danger would be the just the thing for a book of tales of black magic that followed in the footsteps of Dennis Wheatley. Even better, my friend Bob Covington -- a British Fantasy Award winning artist -- is a Dennis Wheatley fan. He would know just the kind of thing I was looking for.

"A pentagram; a menacing figure (either in robes or with a bare torso and a goat's head) waving a sacrificial dagger about; and an altar with a girl sprawled across it, preferably with her dress torn open," said Bob as soon as I told him what the book was about. "Leave it to me."

The problem was that the more I thought about it the more I thought that this wasn't quite the right approach. Yes, I wanted the artwork to invoke those old style covers by being dark and scary and sleazy but I didn't want it to be exploitative. It needed to be dark, decadent, depraved and diabolical -- but in a tasteful way.

That posed a problem. Should I ask Bob to go for the style of Bruce Timm's pin-up work, where the cartoonish line  lends the cheesecake an air of innocence? Or should the picture be rendered realistically but offering equal opportunity titillation, with as much male flesh on display as female flesh? I was leaning towards the second approach but that caused more problems. To generate the full-on sleaze effect the cover girl would probably need to be showing her nipples, anything else would seem coy in this context. This would be difficult justify -- this isn't the '70s, nowadays female readers (and a lot of male ones) won't stand for female nudity on a book cover. And even if we could get away with it how would we do the male equivalent? A naked male torso isn't anywhere near as taboo as a female one. To be on the same level of titillation we would probably have to show male buttocks and that led to problems with the composition -- in order to get a clear view of both the female and the male character who loomed over her and show off his buns of steel we would probably end up with a pose where it looked like he was raping her. That went waaaaaay over the line of good taste. I tried figuring out ways to work a mirror into the composition so that both characters' goodies were on display via their reflections but that just led to cluttered and incomprehensible layouts. I was tying myself up in knots trying to come up with a solution (getting tied up in knots was also on my list of things I wasn't sure if we should include on the cover.)  But as frustrating as all this was ultimately we ended up with an even bigger problem.

Bob was struck down with a  frozen shoulder. He could barely move his arm, let alone draw.

As the deadline drew nearer Bob's shoulder began to heal but he still wasn't up to full fighting strength. After discussing it with him we both decided it was more important for him to heal properly than to hinder his recovery by dashing off a book cover.

Time for Plan B.

Mark West had supplied all the covers for the previous Hersham Horror books and now it was to him I turned to help get the cover completed. Mark shares my love of painted covers -- which is why he was happy for Bob to be the original choice of cover artist for Demons & Devilry -- but his chosen medium is Photoshop so I shifted gears in terms of what I wanted for the cover. Instead of a scene of a Black Mass I now felt the best course was to go for a minimalist cover with just the title, the authors' names and one, maybe two, occult symbols.

Mark, however, knew that the reason I initially wanted Bob for the project was because of my desire for a sleazy cover. So he told me he had a photo that not only walked the line between sleazy and tasteful but which also fitted in neatly with the black magic theme. Unfortunately Mark hadn't looked at the photo in a while and when he emailed it to me he sheepishly admitted that it was much more explicit than he remembered. This proved to be something of an understatement. The photo was of a naked woman in the famous Christine Keeler pose, but instead of a chair covering her nether regions she had a goat skull. "Sorry, mate," I said. "We can't use this. Not only can you see her nipples but it looks like she's got a goat skull vagina."

Mark conceded the point. He had tried to use a sleazy cover for Anatomy of Death, the anthology that he had edited Hersham Horror, but had been shot down by his test audience who found the image sexist, so he knew how sensitive people can be about these things. Still, he struggled gamely on, trying to find a way of getting Demons & Devilry that old school feel without offending anyone.

And then we got some unexpected help.

By a strange coincidence the day we were spitballing ideas for the cover I received an advertisement in my Facebook feed, one of those random suggestions that don't come from any your friends but which just pop up unexpectedly even though they have nothing to do with anything you are interested in, and will serve no useful purpose whatsoever.

Except this one did.

It was an ad for bikinis emblazoned with pentagrams. Suddenly we had a way to make the cover sleazily Satanic but without resorting to offensive nudity. Granted, a photo of a woman in a bikini would still offend some people but compared to the goat skull vagina it felt positively prudish.

Mark came up with his own version of Satanic swimwear and Photoshopped it onto a picture of a female model. Somehow it didn't quite work. Instead of looking sexy the picture came across as sad and desperate.

But Mark wasn't beaten yet. Switching tack he found a tasteful drawing of a nude woman being confronted by a menacing phantasm and worked it into a cover design. But although Mark did a good job I didn't feel that the artwork really popped out the way I wanted it to, socking the reader in the eye.

It was then, trying to save Mark the trouble of trawling through the entire Internet for days on end trying to find something suitable yet copyright free, that my sleep deprived brain came up with the worst idea I have ever had.

I would try to draw a cover image myself.

Every once in a while, when I have decent photo reference, and the stars are in alignment, I can produce pictures where the subject matter can be identified in as few as five guesses. In my fatigued state I reasoned that if I could manage to fulfil that criteria this time then the reduction in the picture's size to fit it onto the book cover would hide the many flaws in my draftsmanship. And so, with the blind optimism of someone who has forgotten that they can't actually draw, I set out to cobble together a picture.

Flipping through The BFI Companion to Horror I found a picture of Anthony Hopkins in The Silence of the Lambs and Tippi Hedren in The Birds and fitted them together with an occult symbol cribbed from Arthur Edward Waite's The Wordsworth Book of Spells. I didn't capture a very good likeness of either actor but that was the point, I wasn't trying for portraits, I was just using them for reference to create my own characters. So the fact that my picture of Tippi Hedren looked like a bleach blonde Amy Winehouse was actually a good thing.

As for all that pesky perspective stuff and background detail I would just get round that by having the occult symbol fill the background and cover everything else in black ink -- kind of Mike Mignola's Hellboy meets Frank Milller's Sin City. Unfortunately I didn't have any proper drawing materials so the solid black inks came out looking scratchy and indecisive. Plus, as I've already mentioned, there was the minor matter of my not actually being able to draw. Halfway through the picture I came to my senses, realised it was awful beyond belief, and asked Mark to go back to the minimalist cover with an occult symbol. 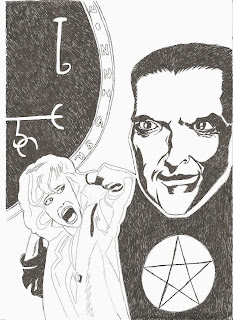 I was offline for 24 hours or so at my day job and when I next corresponded with Mark I found that he had come up with a cover based on an occult symbol we had stumbled across on the Internet. Also, Peter Mark May had joined the discussion and said he felt the cover should be a striking shade of red to catch the reader's eye in a suitably devilish fashion. We all agreed that with this new design we were finally on the right track. A few minor niggles -- mainly about the title font -- were ironed out and suddenly we had a book cover on our hands. Thanking the others for their hard work I looked forward to finally getting some rest.

Then I realised I still hadn't finished writing my story for the anthology ... 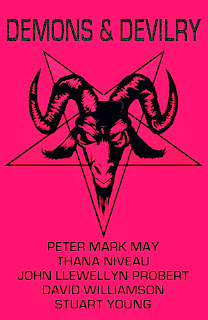 An interesting piece. I did 10 cover designs for Anatomy of Death. All rejected.

Sorry to hear that.

Great piece Stuart. As for AoD, in addition to Neil's 10 (all of which, I hasten to add, were very good), I probably did 10 too (not as good) but we just couldn't find anything that suited everyone.

That's why I liked the "ill at ease" process - Neil sent us the pics, we loved them, job done!

Mark, 10 attempts? It only took me one attempt to do a bad cover. (Not including the dozen or so thumbnail sketches I did playing around with different compositions, colours and concepts.)

10 attempts isn't too far off the norm, I wouldn't have thought. Fogbound took me & Neil a load of goes until we took it upon ourselves - he did the front, I did the back.

No, 10 attempts is too many. I can be rubbish on the first try.